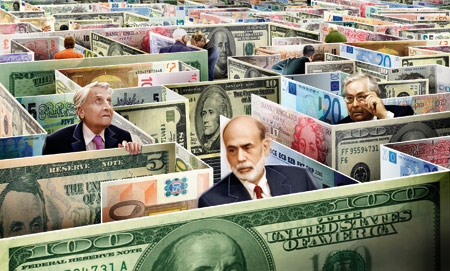 CENTRAL bankers are supposed to be boring and predictable. But on December 12th the rich world’s monetary authorities stunned financial markets with a dramatic, joint plan to ease the liquidity squeeze in global money markets.

America’s Federal Reserve, the Bank of England, the European Central Bank (ECB), the Bank of Canada and the Swiss National Bank all pitched in. The central banks of Sweden and Japan said they, too, were watching developments and would act as necessary. All told, it was an impressive show of central-bank co-ordination.
Financial markets have been seizing up for weeks. The spreads between the federal funds rate and the prices charged by banks to borrow from each other have widened dramatically since early November (see chart). By some measures, the financial system is more blocked than it was in September. And it has long been clear that central banks’ attempts to sort out the mess were failing. The Fed’s discount window, for instance, through which it lends direct to banks, has barely been approached, despite the soaring spreads in the interbank market.
The quarter-point cuts in its federal funds rate and discount rate on December 11th were followed by a steep sell-off in the stockmarket. This was only partially reversed the next day after the central-bank effort. On December 12th the crucial interbank market did reflect more confidence, however. The three-month lending rate in dollars fell more than a quarter of a percentage point.
The central banks have pinched each others’ best ideas for how best to ensure that liquidity gets where it is needed. And they have also, in effect, acknowledged the international nature of the liquidity squeeze, by promising to provide reciprocal currency-swap lines.
The Fed made the most dramatic changes. It introduced a “term-auction facility” through which all banks eligible to borrow from the discount window could bid for one-month money. The first two auctions are to be held on December 17th and 20th, with $20 billion to be sold at each. Two more are to follow in January. The Fed also announced temporary swap lines with the ECB and the Swiss National Bank, worth $24 billion, allowing those banks to lend dollars to banks pledging euros or other currencies.
The Bank of England promised to inject more money into the markets, increasing its two forthcoming term auctions, on December 18th and January 15th, from £2.85 billion ($5.8 billion) to £11.35 billion each time. In all, £20 billion will be supplied at three-month maturities, where strains have once again become particularly acute. And unlike its previous emergency auctions, in late September and October, the price of these funds will be determined by market demand at the auction, not set at the penalty rate that deterred any bank from bidding for the money.
The hope is that by extending the maturity of central-bank money, broadening the range of collateral against which banks can borrow and shifting from direct lending to an auction, the central bankers will bring down spreads in the one- and three-month money markets. There will be no net addition of liquidity. What the central bankers add at longer-term maturities, they will take out in the overnight market.
In some ways, the announcement is a triumph for the ECB. Both the Fed and the Bank of England have shifted away from the familiar tools of a lender-of-last resort—providing funds freely to institutions at a penalty rate. They have moved closer to the ECB’s approach of auctioning funds to a broader set of actors against a wider range of collateral—in effect becoming a market of last resort. The shift makes sense: in both Britain and America it was increasingly clear that the stigma associated with approaching the central bank directly was deterring deserving borrowers. Bagehot’s dictum needed updating when the crisis of confidence affected entire markets rather than single banks. But there are risks. The first is that, for all the fanfare, the central banks’ plan will make little difference. After all, it does nothing to remove the fundamental reason why investors are worried about lending to banks. This is the uncertainty about potential losses from subprime mortgages and the products based on them, and—given that uncertainty—the banks’ own desire to hoard capital against the chance that they will have to strengthen their balance sheets. Nor is the shift from direct lending to auction sure to work: for all the praise heaped upon the ECB, the spread between the ECB’s repo rate and euro-denominated interbank rates is no less worrying than that in America or Britain.
Furthermore, central banks will now be more intricately involved in the unwinding of the credit mess. Since more banks have access to the liquidity auction, the central banks are implicitly subsidising weaker banks relative to stronger ones. By broadening the range of acceptable collateral, the central banks are taking more risks onto their balance sheets.
Set against the dangers of all-out financial seizure, these risks seem worth taking. More important, if they succeed in even modestly loosening the money markets, they will reduce the pressure on central banks to use the broader tool of lower policy rates. Across the developed world monetary policy is becoming increasingly hard to steer. Growth is slowing, because of the fall-out from the financial turmoil and the weakening American economy. In its recent Economic Outlook the OECD revised down expectations for 2008 growth in virtually every country. Yet strong growth in emerging economies is stoking commodity-price inflation. Even if financial markets were functioning normally, central bankers would face hard choices. With the system gummed up, that calculus is harder still.