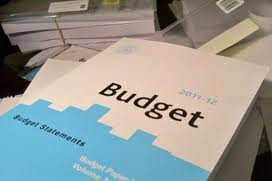 The Georgian Parliament has been reviewing the draft of the budget 2011 introduced by the Ministry of Finance for several weeks.