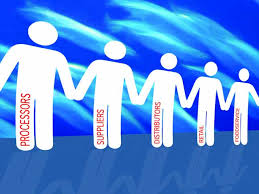 Number of Famous brand shops became more in Tbilisi in recent years. A few years ago, one could hardly meet franchise shops, but now situation has changed.